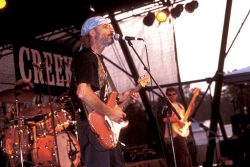 The Waves Kramer Master Tape was modelled on a vintage Ampex valve (tube) 1/4 inch master machine that was in use in the glory days by many famous rock acts blessed to record with the legendary engineer Eddie Kramer (Jimi Hendrix, Jimi Hendrix, The Rolling Stones, Led Zepellin, Jimi Hendrix and some other bands) at London’s famous Olympic Studios.

Waves have a long association with Eddie, producing a range of combo plugins modelling chains that he used for vocals, guitars etc (as they have done with many other prominent engineers), but the Kramer Master Tape, HLS Channel (based on a channel strip from the Helios console in the Rolling Stones Mobile) and Pie Compressor (a model of everyone’s favourite Pye compressor from Olympic) are available as a bundle called “Tapes, Tubes and Transistors” as well as separately.

This Ampeg machine, being made in the U.S.A., was in use on both sides of the Atlantic and earned itself a great reputation for it’s sound quality. While these machines are hard to find today, especially in good working order, they are still thought of with a whimsical fondness by old school engineers who have worked with them.

Waves took a lot of trouble to find such a machine in perfect working order, which, luckily,they managed to do.

There are a few other audio plugin manufacturers with their own take of legendary tape machines on the market and they all offer different features, models and so on. Not having the benefit of using any of these other simulations, but being an owner and user of this particular plugin for some time, I feel I’m only qualified to speak on the Waves Kramer plugin.

I also have the benefit of being a user of tape machines for most of my career and I still own a lovely old Revox A77 Mk1, which is now sadly in need of a bit of refurbishment. Most young people recording today with D.A.W.’s have never used tape, so there is a natural curiosity out there for information on this mystical recording system from the olden days.

A few (too many) words about recording with tape.

The real truth is, there were many downsides to having to use tape recorders. Being analogue, they were noisy (and the tape itself added to the noise of the electronics), tape was expensive and ran out fast, tape shed oxide particles all over the tape recorder’s heads, so the heads had to be constantly cleaned. The abrasive action of fragile tape moving over metal tape heads and rollers caused the top end of the recordings to recede over time, caused the heads to wear so that they needed either replacement or “re lapping” (Google it). Capstans and rubber wheels that controlled tape speed would wear, causing “wow” and “flutter”, heads had to be demagnetized regularly and carefully to avoid contributing to the noise, the electronics had to be constantly aligned so that the correct level went to tape and came back off it. A professional studio had to employ full time maintenance engineers to keep everything, the tape machines, the mixing desks, the outboard gear, the patch bays, the speakers and amplifiers, the studio wiring, the microphones and cables etc in top working condition.

Probably at least half of this maintenance time was spent on the tape machines. If the studios of the day had the advanced digital tools that we have, they would have jumped for joy! No more hiss, no more wow and flutter, no more loss of high frequencies, no more mechanical problems etc etc. The irony of all this is that today’s young engineers and producers yearn for the old gear and convince themselves that if they only had an old tape machine and an old desk they’d get that magic sound

The other thing about tape sims is that everyone is lusting after them for that “warm analogue sound”, that “analogue tape saturation”.

Both of these expectations are a bit unrealistic. When us old timers recorded to tape, yes, we did hit those levels hard and give the v.u. meters a run for their money, but that was just to overcome the noise floor. You pushed the level until it started to break up and then you pulled it back to where it was clean but still covering up the noise. One benefit was the nice compression effect of recording to tape, but obvious tape saturation does not sound good, unless you want to mangle your record. Then, you may as well use an old cassette recorder. You need a light touch when pushing a tape machine. There are many digital plugins (even free ones) that will give you the sound of a digital tape simulator pushed into saturation.

Sorry if that’s disappointing, but it’s true. There is, however, some magic to be found when recording with tape or a good quality tape sim.

For many years, outside of pro studios, I recorded with a 4 track open reel tape recorder, a “Portastudio” 4 track cassette recorder and sometimes we hired an 8 track tape machine to record the band. After every session, I mixed the tunes through a decent mixing desk, usually one of the better old Soundcrafts. The mix was tweaked and checked and then after we all approved it, I transferred the mix to my Revox 2 track. (My Revox A77 was made in Switzerland by Studer and is a half track 1/4 inch machine, meaning the track width is the same as a 2 inch 16 track, a bit wider than 2 inch 24 track).

The result was, every time, “it sounds even better!”. That Revox imparts more clarity and definition to the material and contrary to the myth that tape is “fatter” and has less top end than digital, it can make everything sound a tad brighter. But the main thing is the extra clarity and definition and that is the magic of a great quality tape recorder as I remember it.

Back to the Kramer Master Tape plugin (at last).

After messing about with Kramer Master Tape for a while, I came across some comments online by mastering engineer Bob Ohlsson, who spent his early years with the renown Motown label. Bob tracked down the well maintained Ampex machine and advised Waves as to how he remembered the sound of that famous old Ampex. Apparently the owner of the Ampex machine now uses this plugin! Bob said in an online post that the Ampex always added clarity and detail to the recorded material.

That’s how my Revox sounds.  Waves have nailed it with the Kramer Tape.

There are the obvious controls for input and output level, which, usefully, can be linked if needed, controls for tape speed, normal or over bias (I prefer the normal setting, but it’s extremely subtle), a big lit Monitor/Repro switch, which allows you to bypass the off tape signal and just listen to the valve (tube) preamps, a flux level control, which increases (mainly high frequency) distortion as it is turned clockwise (my favourite setting is 200), there’s a wow and flutter knob that makes everything obviously wobbly over half way, but used carefully can sound very nice, and a noise knob that adds hiss and preamp noise if needed. This is generally best left off, but can soften some sounds in certain situations. Be careful with this knob, because when you get to the end of your song and your D.A.W. stops, the noise doesn’t always stop with it.

In it’s own little area on the top right is a set of controls for tape delay effects. You can get great slapback and echo effects here and the low pass filter knob can dial the top end off the repeats for a nice authentic vintage sound.

There are a lot of useful presets which you can try and they showcase the variety of sounds that you can get with Kramer Master Tape.

This plugin is versatile. I use a high flux level sometimes to soften the top end on unruly cymbals, for example. But my biggest thrill is to set it up to sound like my Revox, just the same way that Bob remembers the effect of a great quality tape machine on music. In fact, I learned from Bob’s online post (it may have been on Gearslutz) exactly how to get that sound from the Kramer Master Tape plugin.

And there you’ll have the sound of a well maintained top class tape machine from the 60’s and 70’s.

The above method is recommended as the best way to set up any plugins in your collection that are emulations of real hardware, as is this. Operating at an input level of -18dB or less should make it easier for the the plugin to respond with greater accuracy and optimum sound quality.

I insert the Waves Kramer Master Tape set up this way on the main output bus of many of my mixes, generally before any compression.

It’s also useful to use it this way sometimes on the drum bus. Extra clarity and detail.

When mixing, I’ve often found that the source can really affect the behavior of this plugin too. On occasion, putting it on a track with certain settings will create a lot of bottom end beef, sometimes more than necessary, while at other times it leaves the low end sounding tight and adds top end definition instead. Sometimes it can be used to go the other way and tame sibilance and top end harshness. It can be a chameleon, from sonic purity to sonic warping.

Don’t make the mistake that most people make and go looking for something that isn’t there and never was. Don’t put it on your master bus and expect Led Zeppelin.

You’ll only get that if you are Led Zeppelin.

I love this plugin. Thank you, Waves and Bob Ohlsson for giving me my Revox back!

p.s. you can go here http://www.waves.com/plugins/kramer-master-tape#eddie-kramer-on-the-kramer-master-tape and download the user guide. At the end is the fascinating “white paper” that tells the real story of the journey to create this plugin and Bob Ohlsson’s contribution is included.